BEHIND THE LINE – Buffer zones alongside all Junior football pitches are mandatory for all games. All parents and other spectators MUST watch from and stay behind the buffer zone lines/barriers.

All players are to be registered on the FA Wales Comet system.

Teams will play other 3 times in the league

All games v Abergavenny Rhinos U13s become byes as they have withdrawn from the league.

The U13s will play 11v11 football on the following field of play: 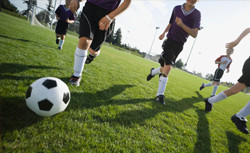 There is no separate Under 13s leaguue this season, but there is an Under 13s cup

Stay Behind the line!

Make it a fun, enjoyable, positive experience for young players!

All players need to be licensed and registered by member clubs before they can play organised football. To register players please visit the information section of our website.